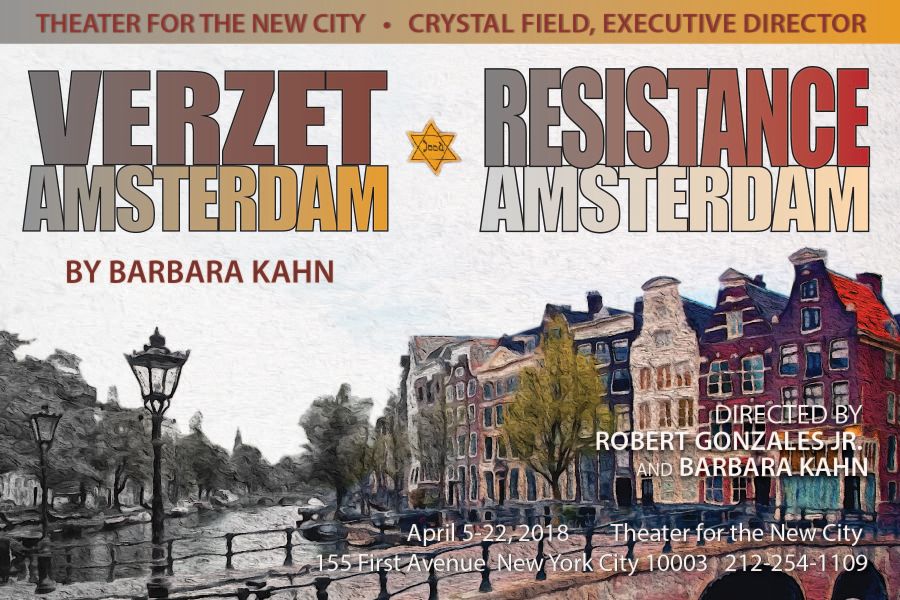 The group of artists in Verzet Amsterdam [Resistance Amsterdam] gathered together to resist the fascist invader and save as many Dutch Jews from deportation and murder as possible. The play focuses on the core group of planners among more than two dozen conspirators. A musician, a sculptor, a museum curator, a composer, a painter turned poet and others risked their own lives to save endangered Jews. Members of the group were gay and straight, white and African-Caribbean (from the Dutch colony of Suriname), Jew and non-Jew. They were friends, colleagues, acquaintances or strangers when they met.

The play opens with their first meeting, as they established rules and determined what they could do and how to do it. They went on to form a cohesive group of people who put aside their differences for the greater good. Frieda Belinfante, a cellist and conductor, and her friend Willem “Willi” Arondeus, a painter and poet, are the main characters who brought together the others—Willem Sandberg, Anton de Kom, Jan van Gilse and Gerrit van der Veen. Together, they forged thousands of identity cards without the “J” for Jew on them or substituted a non-Jewish sounding name. The process of forgery required ingenuity and artists’ tools, demonstrated in the play. When the Gestapo discovered a way to reveal the forgeries, the resisters agreed on a more decisive and violent means to circumvent it.

The play leads up to the characters’ embarking on this most dangerous action. The effort was successful and lives were saved. Of the core group of activists, their fates were varied, and the play provides an accounting. In all wartime occupied countries, there are collaborators—because of fear or greed or a whole range of reasons. The Netherlands was no exception. There were also people who despite their fears were able to oppose and resist the efforts of the invaders to destroy targeted people and the culture they represented. The play demonstrates how a vital and thriving metropolis can quickly become a place of terror for many of its inhabitants. It offers encouragement and hope that in difficult and dangerous times, there will always be people of good will to step up and do the right thing when others are unwilling or afraid.

“People will know that homosexuals have courage.” Willem “Willi” Arondeus.