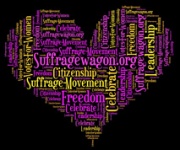 Videos about the Women’s Suffrage Movement

The women’s suffrage movement has been in the shadows of history far too long. This is changing as individual states hold Votes for Women centennial events. And the US will celebrate its national suffrage centennial in 2020.

Many people learn about the suffrage movement first through film and video. For this reason, short videos appeal to busy people and those new to discovering women’s rich activist tradition.

This series of videos funded by this grant is available on Vimeo, YouTube, and Suffrage Wagon News Channel (http://suffragewagon.org), a multimedia news and story platform about the suffrage or Votes for Women movement.

It took 72 years from the 1848 Seneca Falls Convention to win the vote, and 144 years if we count from the Declaration of Independence. After people find out more about this fabulous source of history and stories, they never feel the same way about voting again. During the suffrage movement, many women believed that the vote was not an end in itself, but rather an important tool available to activists seeking social change. The same is true today.

The videos can be viewed individually or used in addition to other supplementary educational materials, including articles, poetry, audio, music, and photography. The Suffrage Wagon web site honors the tens of thousands of suffrage activists that it took to organize support for state campaigns, as well as the uphill effort to ratify the 19th amendment to the US Constitution in 1920.

Suffrage Wagon News Channel presents news about suffrage events and centennials today, as well as the personal and collective stories of individual activists and organizations in former times. This educational approach is intended to inform and inspire people to receive the torch of activism from previous generations and carry on the work of social change today. The video series appeals to women and men, history buffs, students and teachers, and many others interested in democracy and grassroots organiz