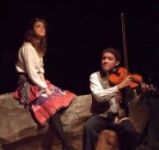 The church in late 19th century Rumania preached against the Jews, while the budding Zionist movement competed for Jewish attention with the Hasidic religious movement. Although Jews had been in the area since Roman times, the new constitution disenfranchised them, excluding them from various occupations and educational opportunities. Roma (Gypsies), significant characters in the play, were also the object of government-sanctioned cruelty and violence. Government oppression encouraged acts of terror by the majority population against these “others,” foreshadowing the 20th century Holocaust. As in contemporary times, violence against women was a calculated tool of the terrorism. Walking from Rumania recreates this atmosphere of danger. Five women in a small village prepare to join a larger group of fusgeyers that is leaving a nearby city in three months. Two of the women are drawn to each other and plan to stay together in America. A pogrom (rampage against Jews) brings tragedy and provides greater impetus for the women to risk the journey. Brother and sister Roma perform in the village for money, she dancing as he plays the violin and recites folk tales. (music by Allison Tartalia, text by Barbara Kahn). The performances function throughout the play as a “Greek chorus,” with tales that comment on the action of the play. The Roma perform a final tale as the group gathers to leave the village. Walking from Rumania concludes on a hopeful note, with the fusgeyers beginning their daring escape, singing “Don’t Look Back.”