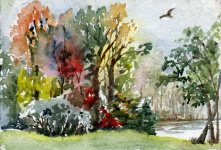 “Watercolors of Majestic Trees” will be an exhibition of my watercolor paintings whose subject matter depicts trees, parks and forests. The purpose of the exhibit is to educate and inform the public on the topic of global warming, a major concern in the aftermath of the horrific damages from Hurricane Sandy. By exhibiting aesthetically pleasing images of trees my aim is to bring attention and awareness to the importance of trees in our environment.

Scientists have spent decades figuring out what is causing global warming. The only way to explain the pattern is to show the effect of greenhouse gases. One of the first things scientist learned is that there are several greenhouse gases responsible for warming the earth and humans emit them in a variety of ways. Most come from combustion of fossil fuels in cars, factories and electricity production. The gas most responsible for the warming is carbon dioxide also called Co2. Deforestation of our land yielding it to buildings of concrete has been one contributing factor. Trees have the ability to store carbon dioxide, the major greenhouse gas and givers oxygen to the planet. Trees provide shade whereas black asphalt and concrete create a heating effect of the earth. In order to understand the effects of all the gases together, scientists tend to talk about greenhouse gases in terms of the equivalent amount of Co2. Since 1990, yearly emissions have gone up by about six billion metric tons of “carbon dioxide equivalent” worldwide, more than a 20% increase.

Therefore if everyone on the planet planted one tree in the world we would have approximately seven billion trees added to the planet-we could reduce the effects of global warming drastically.