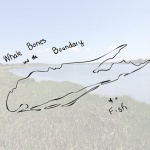 Whale Bones and the Boundary of a Fish is a collection of site-specific recordings that capture the sonic idiosyncrasies of the Long Island landscape, transforming all the sounds produced by the three-dimensional physicality of the chosen locations into ethereal, formless soundscapes. The local history of the area acts as the foundation for the lyrical narrative that accompanies the soundscape to provide a broader context on the relationship of the sounds to the past that shaped them. The range of topics include the social injustice suffered by the former patients of the Kings Park Psychiatric Center who underwent unsafe experimental procedures as well as the Shinnecock Indian Nation whose lands and cultural identities have been encroached upon. Attention is also brought to the important role of conservation and nature preservation in the current climate and energy crises.