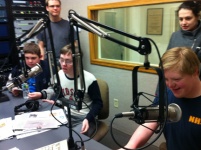 Some examples include: an interview with a local rock band made up of adults with autism and Williams syndrome. Music from the band will also be featured on the show. Interviews with school administrators, local sports figures, the mayor, etc., reviews of upcoming theater events by people with disabilities (there are a few in the later spring).

By turning their mics onto the disability world, the radio hosts will give the community a new perspective on events they know about and a peek at ones they have never seen. The show will reveal the depth of humanity and ability in all these kids, something that is often overlooked because of outward appearances. The show will make them visible and give them a voice.

The show will also have a practical advantage to the teens. It will teach them new skills that may be used for a job down the road, it will introduce them to newsmakers in the community, and it will widen their network of support.

We will send our reporters to cover local events to get their spin on old favorites. In general, the show will feature a “disability-eye view” of our community.
Once the students have been trained in the class, they will host a regular weekly show on Valley Free Radio, WXOJ, 103.3 in Northampton, Ma.