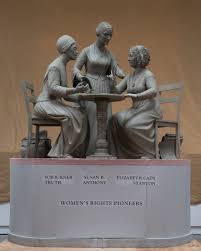 Monumental Women is an all-volunteer nonprofit made up of women’s rights advocates, historians and community leaders. The organization began working in 2014 to develop the first statue of real women in Central Park’s 167-year history and secure a prominent location for the statue on Central Park’s famed Literary Walk. Monumental Women raised $1.5 million in private funding to pay for the Women’s Rights Pioneers Monument. Before the monument, the statues in Central Park only depicted non-fictional and allegorical female characters, but no real women.

Monumental Women has the further goals of increasing awareness and appreciation of women’s history through a nationwide education campaign and challenging municipalities across the country to rethink the past and reshape the future by including tributes in their public spaces to the diverse women who helped advance the cause of women’s rights.  Monumental Women’s next project is the creation of a New York City Women’s Rights Trail throughout all five boroughs.