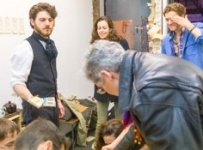 Zara Notes is a theatrical exploration of Friedrich Nietzsche’s Thus Spake Zarathustra. The audience enters to find a man claiming to be the fictional hermit-prophet. This Zara man takes them through the tenets of his philosophy and then invites them to use the materials in the space to build sculptures illustrating his tenets/tablets/tables. If a “table” was “insufficient” in its expression, hammers are passed around and the work is smashed to pieces. Something new must then be build from the fragments.

Zara Notes was born of a belief in collaboration and the potential of creative agency – that artistic/productive transgression engenders the empowered individuals essential for a stronger, more earnest community. Thanks to funding provided by the Puffin Foundation, Zara Notes was realized at the Michael Mut Gallery in the Lower East Side. On Ave C the performances lasted up to six hours. With the doors propped open, audiences were welcome to come and go as they saw fit, and to stay as long as they dared. At the end of each day, things were left as they were to be resumed the following day. It was a seemingly endless cycle of creation/destruction/recreation that lasted for the full month the piece resided there. Thanks to the Puffin Foundation’s grant, which helped cover the cost of production, the piece was free so a wide array of people from the community could attend, and so that audiences could guiltlessly return again and again to see how the work was developing.