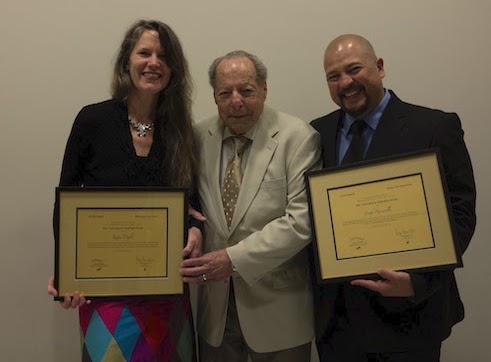 Using cutting-edge scientific tools, he has been able to identify victims of the Guatemalan genocide, gathering evidence for use in court and also providing closure to family members. Peccerelli has also created a national DNA database for the identification of victims of forced disappearance. When Fredy was nine, his own family was forced to flee Guatemala for the Bronx, after his father received death threats.

In 1999 Peccerelli was named by Time Magazine and CNN as one of the fifty Latin American Leaders for the New Millennium.In 2006 he was the recipient of the Washington Office on Latin America (WOLA)’s Human Rights Award and in 2008 he received the Heinz R. Pagels Human Rights of Scientists Award from the New York Academy of Sciences for his work. Like Kate Doyle, Peccerelli’s work was also featured in the award-winning documentary Granito, by Pamela Yates and Paco de Onís, which narrates his involvement as a forensic expert in the efforts to seek justice for crimes against humanity.

The Guatemalan Forensic Anthropology Foundation (www.fafg.org) is an autonomous, non-profit, technical and scientific NGO. Its aim is to strengthen the Guatemalan justice system and respect for human rights by gathering evidence, investigating, documenting, and raising awareness about past instances of human rights violations, particularly massacres and extrajudicial killings that occurred during Guatemala’s 36- year-long Internal Armed Conflict. Its main tools in pursuing this goal are the application of forensic anthropology, forensic archaeology and forensic genetic (DNA) techniques in exhumations of clandestine mass graves and the analysis of the remains of victims from the Internal Conflict.