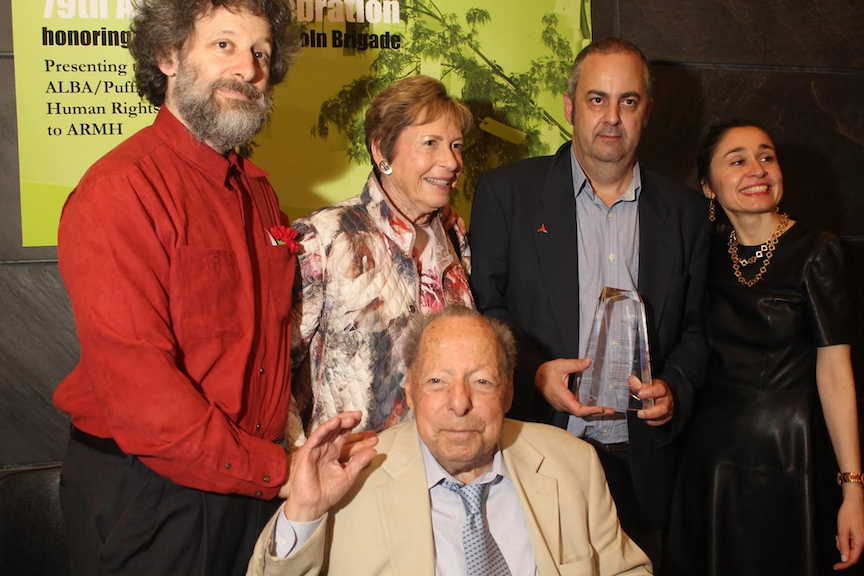 2015 Association for the Recovery of Historical Memory in Spain

The Abraham Lincoln Brigade Archives (ALBA) will present the ALBA/Puffin Award for Human Rights Activism to the Association for the Recovery of Historical Memory in Spain (Asociación para la Recuperación de la Memoria Histórica, ARMH). One of the largest monetary awards for human rights in the world, this $100,000 cash prize is granted annually by ALBA and the Puffin Foundation to honor the International Brigades and connect their inspiring legacy with contemporary causes.

“Thanks to work of the ARMH, Spain has been able to break the wall of oblivion that enveloped the victims of that dreadful period,” said Judge Baltasar Garzón, human rights advocate and recipient of the first ALBA/Puffin Award for Human Rights Activism in 2011.

More than 100,000 bodies lie buried in unmarked mass graves all across Spain, victims of right-wing repression during the Spanish Civil War (1936-39) and the ensuing Franco dictatorship (1939-75). Since the return of democracy in 1978, tens of thousands of Spaniards have longed to locate and exhume the remains of their loved ones, to honor their memory, and to give them a proper burial. Yet, for almost four decades now, the Spanish state has largely ignored the rights of those who were disappeared or killed by Spanish fascism, victimizing them for a second time by portraying them, in effect, as unavoidable “collateral damage” of Spain’s brokered transition to democracy.

The ARMH was born out of journalist Emilio Silva’s struggle to exhume the remains of his grandfather from the ditch in northwestern Spain where he was thrown after his execution by local fascists in 1936. In 2000, with the help of a team of volunteers, Mr. Silva unearthed his grandfather’s body and those of twelve others killed in the early days of the Civil War. The exhumation was widely publicized and many other Spaniards subsequently approached Mr. Silva with a desire to recover their own family members.

Mr. Silva established the ARMH in 2000. Since then the Association has carried out over 150 exhumations and recovered the remains of more than 1,300 victims of Franco’s regime—roughly 8% of Spain’s disappeared. The Association has done this work with almost no state support. The ARMH has worked with forensic experts to set up a DNA database and worked to put victims’ rights and transitional justice on Spain’s political agenda. Through its advocacy work at the national and international level, in 2003 the United Nations Working Group on Forced Disappearances began including Spain in its reports.

“The award to Mr. Silva and ARHM is particularly appropriate, as it has a direct link to the struggle that the Lincoln volunteers put their lives on the line for. In fact, to this day a number of American volunteers lie shrouded in Spanish earth in unmarked graves.” – Prof. Anthony Geist, University of Washington.

Part of an initiative designed to sustain the legacy of the experiences, aspirations and idealism of the Abraham Lincoln Brigade, the ALBA/Puffin Award for Human Rights Activism supports current international activists and human rights causes. The Award was created by philanthropist and visionary Perry Rosenstein, President of the Puffin Foundation, which in 2010 established an endowed fund for the ALBA/Puffin Award for Human Rights Activism.

Other recipients of the ALBA/ Puffin Award for Human Rights Activism include Kate Doyle and Fredy Peccerelli, who work to expose human rights violations in Guatemala, United We Dream, a national network of youth-led immigrant activist organizations that fight for the rights of millions of undocumented immigrants in the United States, and public-interest lawyer Bryan Stevenson.

Since it was founded in 1983, the Puffin Foundation Ltd. has sought to open the doors of artistic expression by providing grants to artists and art organizations who are often excluded from mainstream opportunities due to their race, gender, or social philosophy. The Puffin, a species whose nesting sites were endangered by encroaching civilization, were encouraged to return to their native habitats through the constructive efforts of a concerned citizenry. The Foundation has adopted the name Puffin as a metaphor for how it perceives its mission, which is to ensure that the arts continue to grow and enrich our lives. In so doing it has joined with other concerned groups and individuals toward achieving that goal. The Puffin Foundation is also a long-standing supporter of ALBA’s educational mission.

Association for the Recovery of Historical Memory in Spain (Asociación de la Recuperación de la Memoria Histórica): www.memoriahistorica.org.es
The Association for the Recovery of Historical Memory in Spain (ARMH) which is staffed by volunteers, collects oral and written testimonies on the victims of Franco’s regime and excavates and identifies the bodies that are in mass graves. In the spring of 2002, ARMH appealed to the United Nations High Commissioner for Human Rights to request that the Spanish government be made to apply international law for the disappeared. ARMH also helped draft the 2007 Historical Memory Law, which recognizes for the first time the victims on both sides of the Spanish Civil War, gives rights to the victims and the descendants of victims of the Civil War and the subsequent dictatorship of General Francisco Franco, and formally condemns the Franco Regime.