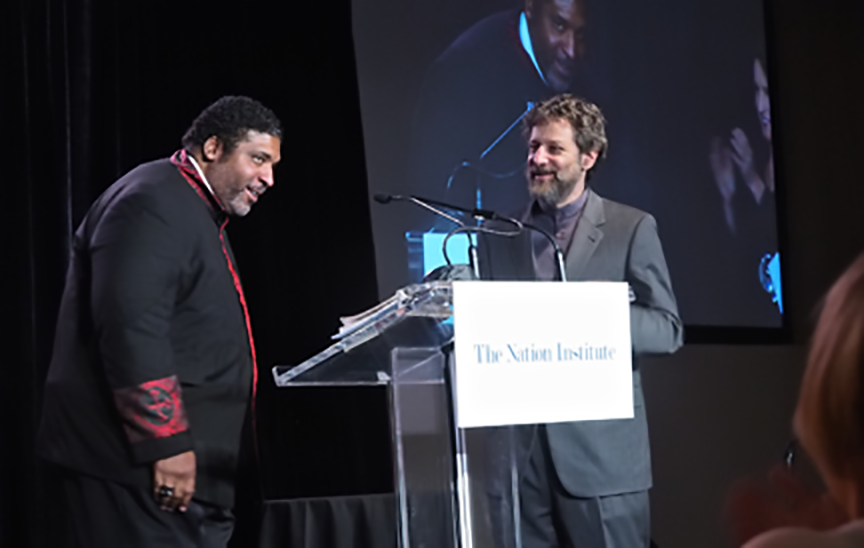 On behalf of Perry and Gladys Rosenstein and the Puffin Foundation, I am honored to announce the winner of this year’s Puffin/Nation Prize for Creative Citizenship. This annual $100,000 award honors work that challenges the status quo through distinctive, courageous, imaginative and socially responsive work.

Reverend William Barber II, Pastor of the Greenleaf Christian Church in Goldsboro, North Carolina more than exemplifies these goals. He is the architect of the “Forward Together Moral Monday Movement,” an alliance of more than 200 progressive organizations and vast numbers of the public, in North Carolina and beyond.

But the Reverend has not only built extraordinary coalitions, he’s also on the front lines himself. He’s been arrested three times for civil disobedience as he stood for educational and social justice.

Reverend Barber is a leader in this fight for true equality and social justice. His efforts to organize everyday citizens and create a movement to fight discriminatory laws are a true example of creative citizenship.

We are honored Tonight to be able to help make this coming year one in which we can share in Reverend Barber ’s victories. His fight is our fight, and we salute him and stand with him. Thank you Reverend Barber.