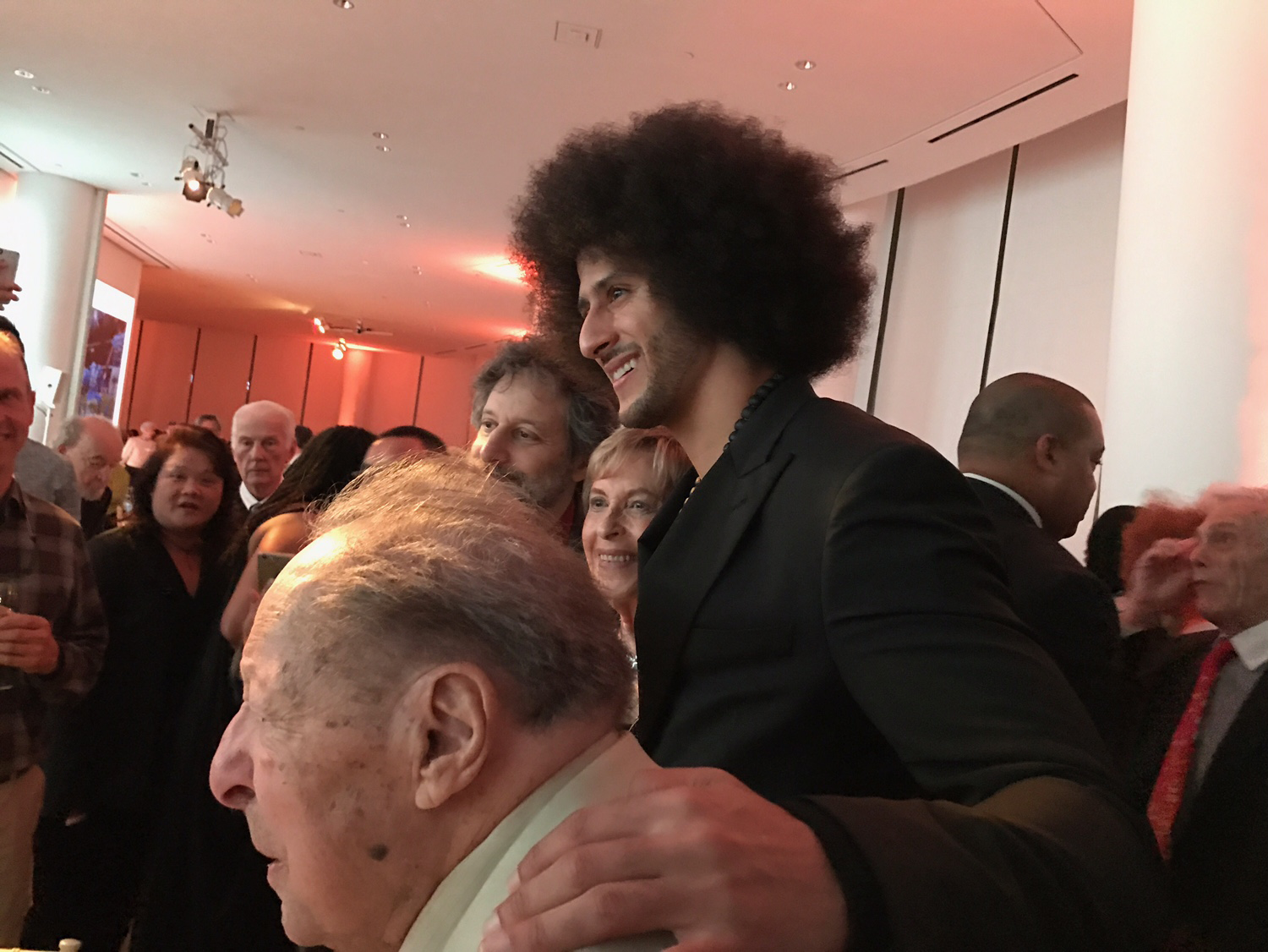 During last year’s NFL pre-season, then-San Francisco 49ers quarterback Colin Kaepernick began refusing to stand for the playing of the national anthem in protest of racism and police violence.

“I am not going to stand up to show pride in a flag for a country that oppresses black people and people of color,” Kaepernick said at the time. “To me, this is bigger than football and it would be selfish on my part to look the other way. There are bodies in the street and people getting paid leave and getting away with murder.”

Last September, after he began kneeling, Kaepernick announced he would donate $1 million and the proceeds from his jersey sales to organizations “working in oppressed communities.” He has nearly completed that pledge, having given to organizations like United We Dream, Black Youth Project, the Lower East Side Girls Club, Meals on Wheels, 350.org, Coalition for the Homeless, and many more.

Colin Kaepernick led the 49ers to within three points of winning the Super Bowl in 2013. He’s completed 72 touchdown passes and has a career 88.9% passer rating. Despite these successes, Kaepernick remains unsigned.

The Puffin/Nation Prize for Creative Citizenship is a $100,000 prize that honors individuals that challenge the status quo through distinctive, courageous, imaginative, and socially responsible work of significance. It is intended to encourage the recipients to continue their work, and to inspire others to challenge the prevailing orthodoxies they face in their own lives.

“Colin Kaepernick is a true example of a creative citizen,” said Perry Rosenstein, President of The Puffin Foundation Ltd. “We all know he has courageously risked his position to focus attention on abuses by law enforcement against people of color and on the plague of racism in the United States. But he has also excelled as a committed activist and community organizer who has involved himself in myriad social issues. From educating youngsters on how to stand up for their rights to supporting a multitude of organizations fighting for equality and a better society, Colin Kaepernick’s creative commitment to fighting for change is a model for us all.”

Remarks of Neal Rosenstein, Vice President of the Puffin Foundation, awarding the Puffin/Nation Prize for Creative Citizenship to Colin Kaepernick.

On behalf of Perry and Gladys and the Puffin Foundation I’d like to say it’s truly a pleasure to be here tonight in this wonderful locale, in support of the vital work of the Nation Institute, with this fantastic audience, honoring the truly extraordinary Colin Kaepernick.

The Puffin/Nation prize recognizes “Creative Citizenship.” Every year the Institute and Puffin wrestle over the outstanding individuals who are nominated for this award. Our choice this year was clear.

Colin is a true example of a creative citizen. We all know he has courageously risked his career to focus attention on the abuses by law enforcement against people of color and on the plague of institutionalized racism and oppression in the United States. But his activism and engagement go far beyond the headlines of exercising his first amendment rights to “take a knee” during the playing of the national anthem. Here’s what you may not know:

He has excelled as a committed citizen-activist. From fostering youngsters on how to stand up for their rights in society, to supporting great organizations like: Bill McKibben’s 350.org; the American Friends Service Committee; groups fighting for the rights of women and indigenous peoples and the local grassroots organizations at the forefront of confronting racism in their neighborhoods and across the country… Colin’s creative commitment to fight for change is a model for us all.

We weren’t surprised to learn that he will be donating the $100,000 that comes with this award to his “Know Your Rights Camps” a free campaign for youth to raise awareness on higher education, self empowerment, and instruction on how to properly interact with law enforcement.