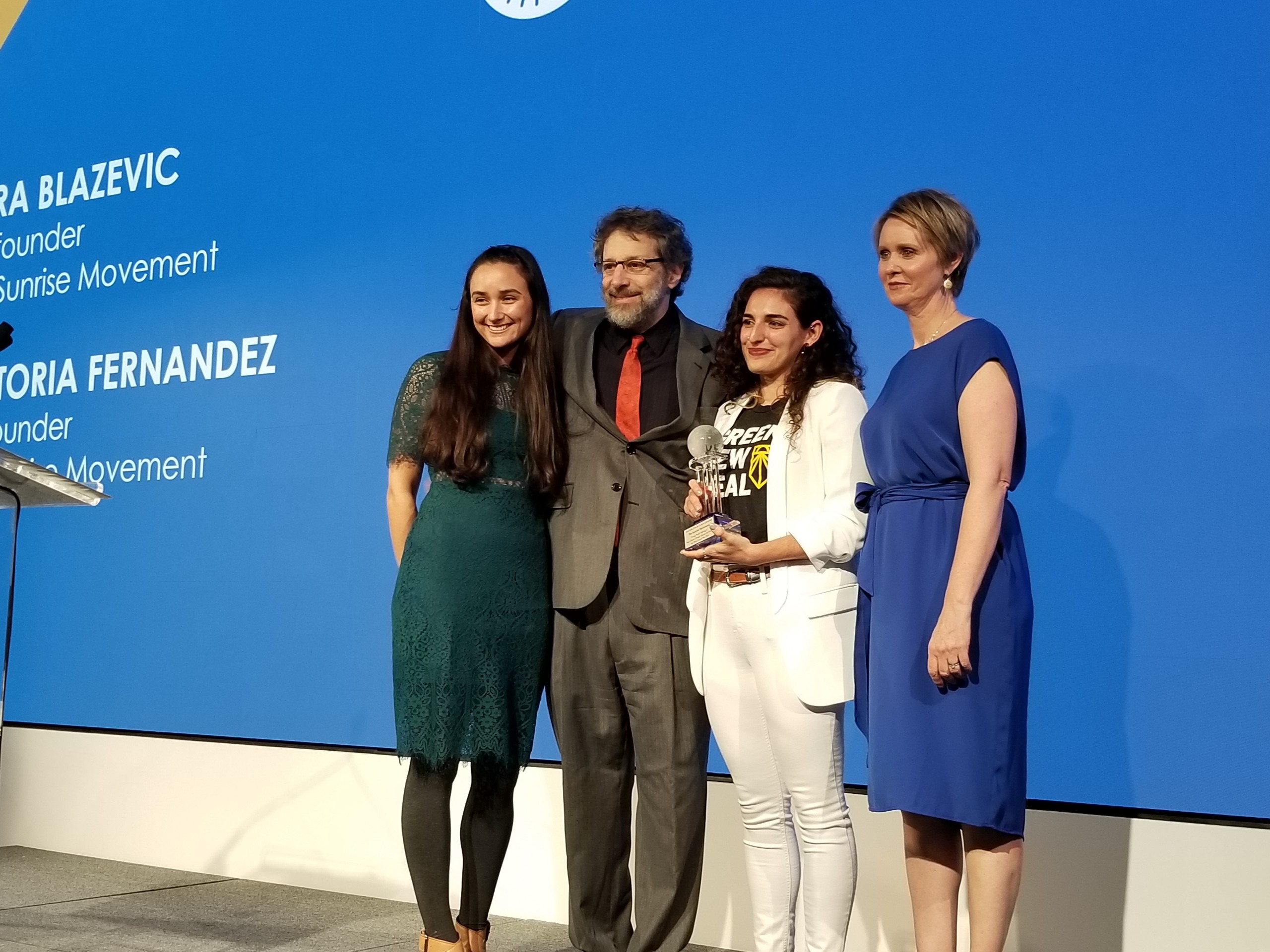 On behalf of Perry & Gladys Rosenstein & the Puffin Foundation I’d like to say it’s truly a pleasure to be here tonight in this wonderful locale, in support of the vital work of Type Media, with this fantastic audience, honoring the truly extraordinary activists of the Sunrise Movement.

The Puffin Prize recognizes “Creative Citizenship.” Every year Type and Puffin wrestle over the outstanding individuals who are nominated for this $100,000 award. Our choice this year was clear. I’d like to briefly explain why Sunrise won this year’s Prize.

We all know it. Despite scientific consensus, we continue to poison our planet, pollute our air and water, proceed on a path that is environmentally unsustainable and whose impacts are increasingly irreversible. IRRVERSIBLE!

Much of the world’s biodiversity is slowly dying on our watch and unless dramatic action is taken to address the human caused degradations of our environment, we’ll be faced with increased human suffering, mass extinctions, and the collapse of ecosystems.

We need real and comprehensive change on an international level, we need it yesterday, and there’s no organization doing more to fight for the national policies to combat climate change and create a green economy than the Sunrise Movement.
Like so many students and young people across the planet, the activists of Sunrise are sick and tired of lackluster promises of action and efforts to ignore or downplay the risks to our future.

But most importantly they’ve championed real change, A Green New Deal. These young people have united to stop climate change and are fighting to create millions of good jobs in the process. Thanks to their efforts that Green New Deal is closer to reality. Through their tactics, persistence and perseverance, they’ve helped: to revolutionize the debate about the danger facing us all and, promote real, workable, progressive solutions to prevent an environmental catastrophe and put folks to work creating a more green economy. Ultimately, we hope those efforts will lead us away from fossil fuels to a new energy economy that “Keeps it in the Ground.”

For a moment, I’d also like to acknowledge the presence of the students from Parkland and March for Our Lives – last year’s winners of the Puffin Prize who we’re honored to have here again tonight. They were recognized for mobilizing students to stand up and be counted in last year’s midterms and for being the most ardent & successful organizers against our unfettered gun culture in recent memory. Their actions continue to help change laws, save lives, motivate their peers, and shape our conceptions on guns and gun violence. Bravo.

Tonight’s awardee’s – Sunrise – impressed us in a similar way. They’ve changed the debate and continue to change minds about climate change. Their commitment, organizing brilliance, and idealism represent the essence of creative and concerned citizenry.

And that’s why I’m honored to now bring two of the co-founders of Sunrise, who are also two of the leaders of Sunrise New York Sara Blazevic and Victoria Fernandez, up to the stage to accept this year’s Puffin Prize for Creative Citizenship.

I want you all to think back to a little over a year ago. What did comprehensive climate action look like in the summer of 2018? It probably included stopping the expansion of fossil fuel projects and putting a price on carbon. Maybe you’re thinking of the Paris Climate Agreement, when the world’s governments finally agreed to limit greenhouse gas emissions.

These are all essential parts of what it’s going to take to combat the climate crisis. But they are woefully inadequate compared to the scale of action we need.

Now think about what climate action looks like today. I hope you’re thinking about the Green New Deal, putting generations to work with good union jobs building high speed rail, retrofitting homes for energy efficiency, and taking care of our children and elders.

For as long as I can remember, efforts to fight climate change were couched in terms of sacrifice. “Don’t leave the lights on.” “Stop taking flights.” “Consume less.” While these all might be good ideas on their own, they presume a politics of austerity, a rightwing frame to scare Americans away from bold solutions and get us to accept less than we deserve. The Green New Deal takes back that narrative, letting us imagine — what does an economy that works for us all look like? Instead of scaring us with a grim future where everybody has less, it invites us to conceive of a bright future where everybody has what they need.

So what changed a little over a year ago? Like many of you, I was cheering on the young people of Sunrise as they sat in the office of Nancy Pelosi, a week after the midterm election when Democrats took back the House of Representatives. This was the first moment that much of the world heard the words “Green New Deal” and saw the courage of Sunrise’s army of young people asking for more from their leaders.

What often gets left out of this story is the work that they put in to deliver the 2018 Democratic majority in the first place. I should know. Along with state senators who ended Republican rule in Albany, I had the pleasure of being in the first round of candidates Sunrise endorsed, riding the subway to canvass with high schoolers, college students, and young adults wearing the Sunrise shield.

What Sunrise brought to my campaign wasn’t just hope, energy, and hours of phone-banking prowess. They animated all that they did with the spirit and vision of the Green New Deal.

The young people of Sunrise know that we need to elect better leaders in office — not politicians who will pay lip service to the inequality that’s driving our country apart and the ecological crisis that threatens our homes, but real leaders who are willing to reject campaign contributions from the fossil fuel industry, and fight for what is needed and what is right.

And they also know that elections are only half the battle. They’ve lived through too many broken promises and too many worsening storms. Before the young people took on the national establishment in Nancy Pelosi’s office, they were here in New York, challenging Governor Cuomo’s fiefdom. Between all those door-knocking shifts, they found the time to occupy the governor’s office over his refusal to stop taking fossil fuel money. Rather than commit to taking a step to rid our government of the influence of fossil fuel millionaires and billionaires, the governor had the young people arrested — including the two young women accepting this award tonight.

This is the kind of moral courage that gives me so much hope. Because I know that the young people will win this fight. And I know that no matter who is in office, they will be in the streets to deliver the change we all need. And I hope that you all will join me by their side.