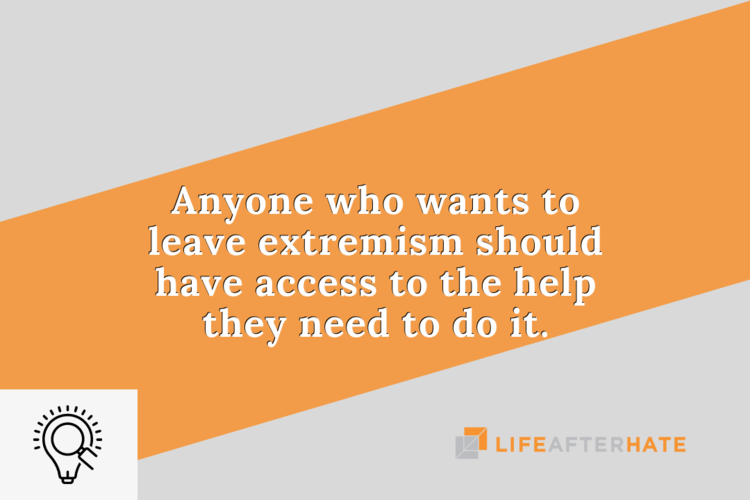 January 6, 2022- On the one-year anniversary of the horrific assault on our nation’s capital, the Abraham Lincoln Brigade Archives (ALBA) announces today that the 2022 ALBA/Puffin Award for Human Rights Activism will go to Life After Hate (LAH). One of the largest monetary awards for human rights in the world, the ALBA/Puffin Award is a $100,000 cash prize granted annually by ALBA and the Puffin Foundation to honor the nearly 3,000 Americans who volunteered in the Spanish Civil War (1936-1939) to fight fascism under the banner of the Abraham Lincoln Brigade. The award ceremony will take place at a live online gala on Saturday, April 30, 2022.

Due to the alarming rise of fascism in America, as witnessed one year ago in Washington, ALBA and The Puffin Foundation renew their commitment to combating far-right extremism. LAH is an organization whose mission is helping people leave the violent far-right to connect with humanity and lead compassionate lives. Their vision is a world that allows people to change and contribute to a society without violence. The work of LAH will help ensure that the horrendous events of January 6 are never repeated.

“Life After Hate is honored to accept the ALBA/Puffin Award for Human Rights Activism from the Abraham Lincoln Brigade Archives. We are humbled to be selected for such a distinguished award. As the first nonprofit in the U.S. dedicated to helping individuals disengage from violent far-right hate groups and hateful online spaces, we also know that direct interventions, one person at a time, can produce substantial ripple effects including the prevention of hate crime and domestic terrorism. The anniversary of the January 6 insurrection painfully reminds us that Life After Hate’s work is needed now more than ever before and ALBA’s generous award will help us expand the scale and effectiveness of our program.”

Life After Hate is a leader in the violence intervention community and the first nonprofit in the U.S. dedicated to helping individuals disengage from violent far-right hate groups and hateful online spaces. Since its founding in 2011, LAH has expanded its services to include family members of individuals who are involved with or are disengaging from the violent far-right.

A central part of the LAH mission is their innovative approach to interventions. A multidisciplinary team model pairs former violent extremists and mental health practitioners to help individuals leave hate and violence frameworks and to set and manage their goals to restore their lives.

“The ferocious attack on democracy one year ago laid bare how deeply right-wing extremist groups have embedded in our country and our culture,. Life After Hate is one of the few organizations in the United States dedicated to dismantling networks of hate, white supremacy, and neo-Nazism – one person at a time. There couldn’t be a better time for ALBA to recognize the tremendous work of Life After Hate to pull people out of violent extremism and back into humanity.”

The ALBA/Puffin Award for Human Rights Activism is an initiative to sustain the legacy of the experiences, aspirations, and idealism of the Abraham Lincoln Brigade. It supports contemporary international activists and human rights causes. A philanthropist and visionary, the late Perry Rosenstein created and established an endowed fund for this award in 2010.

“The work and message of Life After Hate has never been more valuable and more needed. A daily diet of media-infused disinformation touted by self-absorbed politicians spewing far-right rhetoric has led to more and more Americans turning to violence and hate groups. The success of Life After Hate’s outreach, research, and interventions shows that we can overcome this hate and have people reconnect with humanity and lead compassionate lives.”