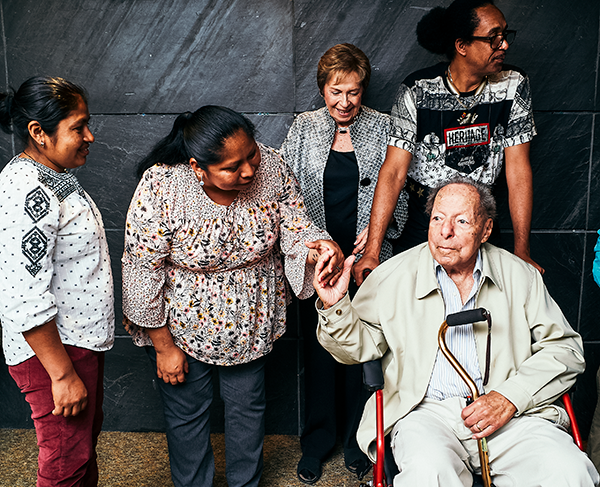 Representatives of the Coalition of Immokalee Workers, Puffin and ALBA at the award ceremony.

On May 12, 2018, the Abraham Lincoln Brigade Archives (ALBA) will present the ALBA/Puffin Award for Human Rights Activism to the Coalition of Immokalee Workers (CIW) in support of their continued efforts to protect the rights of agricultural workers, prevent involuntary servitude, and create a food supply chain that is fair from bottom to top. One of the largest monetary awards for human rights in the world, this $100,000 cash prize is granted annually by ALBA and the Puffin Foundation in honor of the 3,000 Americans who volunteered in the Spanish Civil War (1936-1939) to fight fascism under the banner of the Abraham Lincoln Brigade.

Founded in 1993 by a small group of workers who had been meeting in a church, the CIW fought to improve the lives of tomato pickers in Southern Florida. After years of organizing in Immokalee, in 2001, the CIW launched the first ever boycott of a national fast food company—Taco Bell. Four years later, the company agreed to support wage increases and workplace protections for tomato pickers. Since then, food corporations, including McDonalds, Burger King, Whole Foods, Subway, and Walmart have followed suit and reached agreements with the CIW. Today, 14 of the world’s largest food retailers and restaurants have signed fair food agreements with the CIW.

Building off these unprecedented agreements, the CIW created a revolutionary program to make the agriculture supply system more equitable: The Fair Food Program, a groundbreaking partnership among farmworkers, food retailers, and growers to ensure decent wages, safe working conditions, and a real voice on the job for farmworkers. The program, which today spans seven states and three crops, has virtually eliminated some of the industry’s worst human rights abuses from participating farms, including sexual violence and slavery.

“The Fair Food Program has proven itself to be a uniquely effective solution to the scourge of slavery and other human rights abuses in agriculture,” said CIW Member Julia de la Cruz. “Even more recently, the program has provided a success model for ending sexual violence in the age of #MeToo, as the country seeks to combat sexual harassment and assault in the workplace.”

“In its commitment to social justice and human dignity the CIW keeps alive the same values that motivated the women and men who stood up to fascism in the Spanish Civil War” said Fraser Ottanelli, Chair of ALBA’s board. The ALBA/Puffin Award for Human Rights Activism is an initiative to sustain the legacy of the experiences, aspirations and idealism of the Abraham Lincoln Brigade. It supports contemporary international activists and human rights causes. The award was created by visionary and philanthropist Perry Rosenstein, President of the Puffin Foundation, who established an endowed fund for this human rights award in 2010.

Other recipients of the ALBA/ Puffin Award for Human Rights Activism include investigative journalists Lydia Cacho and Jeremy Scahill; Judge Baltasar Garzón; Kate Doyle and Fredy Peccerelli, who work to expose human rights violations in Guatemala; United We Dream, a national network of youth-led immigrant activist organizations that fight for the rights of millions of undocumented immigrants in the United States, and public-interest lawyer Bryan Stevenson.

Coalition of Immokalee Workers: www.ciw-online.org
The Coalition of Immokalee Workers is a human rights organization internationally recognized for its achievements in the fields of social responsibility, anti-sexual violence, community organizing, and sustainable food. The CIW’s Fair Food Program is a groundbreaking partnership among farmworkers, Florida tomato growers, and fourteen major food retailers. Participating retailers agree to purchase exclusively from suppliers who meet a worker-driven code of conduct, which includes a zero-tolerance policy for slavery and sexual harassment. Retailers also pay a “penny-per-pound” premium, which is passed down through the supply chain and paid out directly to workers by their employers. Since the program’s inception in 2011, buyers have paid over $26 million into the FFP.