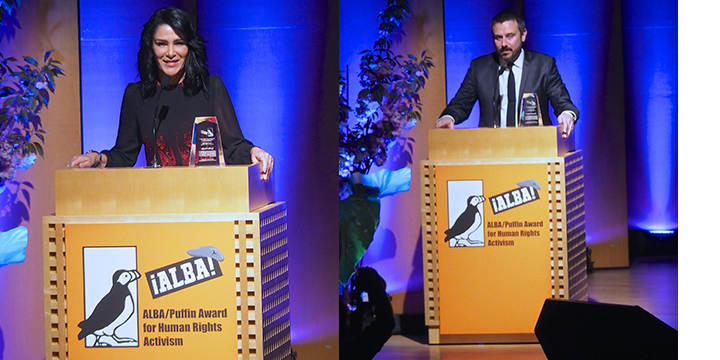 New York—On Saturday, May 7, 2016, the Abraham Lincoln Brigade Archives (ALBA) will present the ALBA/Puffin Award for Human Rights Activism to journalists Lydia Cacho and Jeremy Scahill. One of the largest monetary awards for human rights in the world, this $100,000 cash prize is granted annually by ALBA and the Puffin Foundation to honor the International Brigades and connect their inspiring legacy with contemporary causes.

“Cacho and Scahill both shine as rare examples of investigative journalists who place human rights at the center of their work,” said ALBA board member and 2012 award recipient Kate Doyle. “Their reporting not only affects government policies, but seeks to champion and protect the lives of the world’s most vulnerable citizens. ALBA is proud to honor them.”

Working on both sides of the volatile Mexico-United States border, Lydia Cacho and Jeremy Scahill have dedicated their careers to exposing the corruption, violence and abuse of power which go routinely unchallenged in the mainstream media. Cacho’s and Scahill’s work exemplifies the intersections of expository reporting and human rights activism. Their commitment to breaking the most profound silences has prompted investigations into the United States’ shadow wars across the Middle East and Africa as well as Mexican authorities’ use of censorship, torture and corruption.

Part of an initiative designed to sustain the legacy of the experiences, aspirations and idealism of the Abraham Lincoln Brigade, the ALBA/Puffin Award for Human Rights Activism supports current international activists and human rights causes. The Award was created by philanthropist and visionary Perry Rosenstein, President of the Puffin Foundation, which in 2010 established an endowed fund for the award.

“This award recognizes and encourages individuals or groups whose work has a positive impact on the advancement and/or defense of human rights. Jeremy Scahill and Lydia Cacho have courageously used their investigative journalism to expose reactionary forces and the information they wish to conceal,” Rosenstein said.