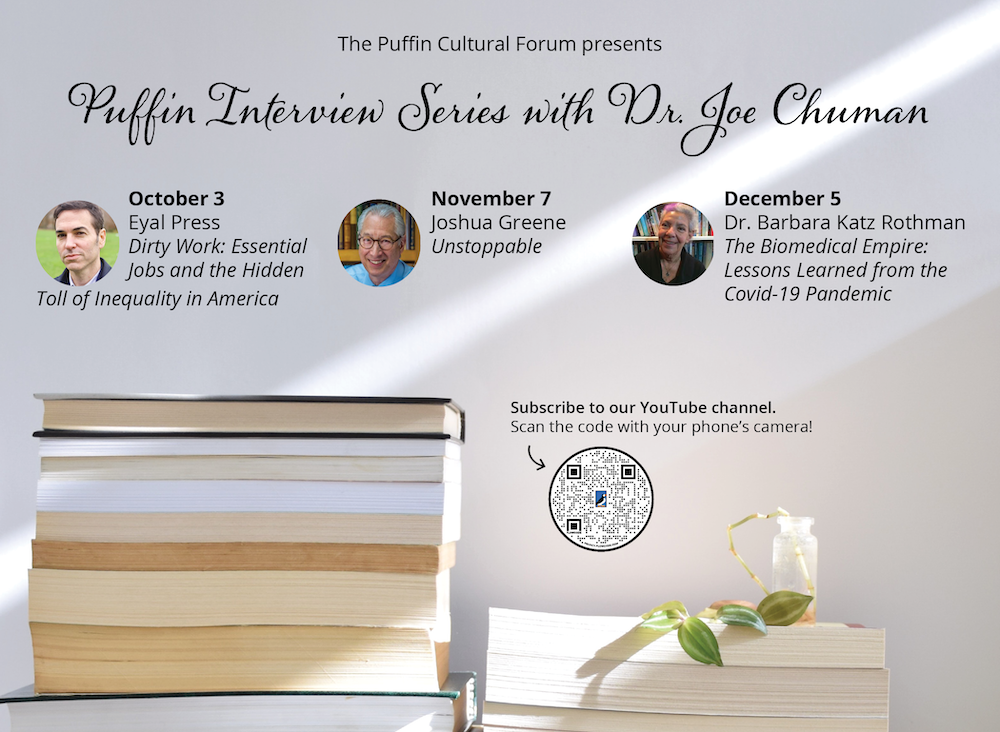 The Puffin Cultural Forum is proud to present our “Puffin Interview Series with Dr. Joe Chuman.” On the first Sunday of every month Dr. Chuman will delve into and explore the work of renowned authors through meaningful dialogue in an intimate interview format. There will be an opportunity for audiences to ask their own questions during a Q&A session. Dr. Chuman recently retired from his post as the leader of the Ethical Culture Society of Bergen County after forty-six years. He has taught at Columbia University, Hunter College, and the United Nations University for Peace in Costa Rica. His works have been published in the New York Times, The Humanist, Free Inquiry, Humanistic Judaism, The Hill and many other periodicals.

Sunday, October 3, 4:00pm
Dr. Joe Chuman interviews Eyal Press, a Puffin Foundation Writing Fellow at the Type Media Center, and the author of Dirty Work: Essential Jobs and the Hidden Toll of Inequality in America. Press presents a paradigm-shifting view of the moral landscape of contemporary America through the stories of people who perform society’s most ethically troubling jobs: drone pilots who carry out targeted assassinations, undocumented immigrants who staff the “kill floors” of industrial slaughterhouses, and guards who patrol the wards of the United States’ most violent and abusive prisons. Eyal Press has received a James Aronson Award for Social Justice Journalism, an Andrew Carnegie fellowship, and is a contributor to the New Yorker, the New York Times, and numerous other publications.

Sunday, November 7, 4:00pm
Joshua M. Greene’s Unstoppable tells the story of Siggi B. Wilzig’s astonishing journey from Auschwitz survivor and penniless immigrant to Wall Street legend. After surviving beatings, death marches, and near starvation, Wilzig was freed from camp Mauthausen to work for the US Army hunting Nazis, a service that earned him a visa to America. On arrival, he made three vows: to never go hungry again, to support the Jewish people, and to speak out against injustice. He earned his first dollar shoveling snow after a fierce blizzard. His next job was laboring in toxic sweatshops. From these humble beginnings, he became President, Chairman and CEO of a New York Stock Exchange-listed oil company and grew a full-service commercial bank to more than $4 billion in assets. Author Joshua M. Greene is a renowned Holocaust scholar and filmmaker whose works have aired on PBS, Discover, and has appeared on NPR, CNN, Fox News, and more.

Sunday, December 5, 4:00pm
Just released by Stanford University Press, Dr. Barbara Katz Rothman’s Biomedical Empire: Lessons Learned from the Covid-19 Pandemic expounds on the dangers of the “medical industrial complex.” Dr. Katz Rothman shows that biomedicine has the key elements of an imperial power: economic leverage, the faith of its citizens, and governmental rule. She investigates the Western colonial underpinnings of the empire and its rapid intrusion into everyday life, focusing on the realms of birth and death. This provides her with a powerful vantage point from which to critically examine the current moment, when the COVID-19 pandemic has exposed the power structures of the empire in unprecedented ways while sparking the most visible resistance it has ever seen. Dr. Barbara Katz Rothman is a professor of Sociology at the City University of New York.