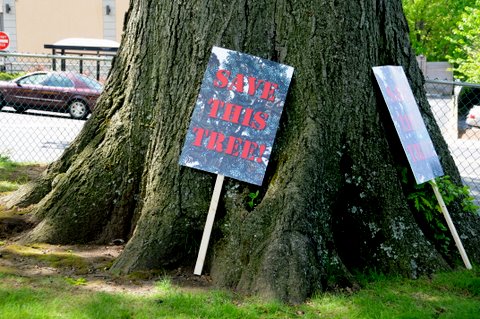 The great red oak that has grown for more than 350 years at what is today the intersection of Cedar Lane and Palisade Avenue in Teaneck, NJ will be allowed to die a natural death. Through the efforts of the Puffin Foundation, which provided an undisclosed amount of funding, a semi-circular conservation easement has been established in the area of the tree. The Bergen County Department of Parks will provide maintenance of the tree for the duration of its life.

Senator Loretta Weinberg described Perry Rosenstein and his wife Gladys as “the catalysts who provided the necessary money to establish the easement.”

Rosenstein spoke about some of the remarkable events that the great oak has quietly witnessed. “It had been here since the REvolutionary War when George Washington retreated on this route,” he said . “It was here during the Civil War when the Emancipation Proclamation gave freedom to African-American slaves and when hundreds of young men and women from Teaneck who went off to fight fascism in WWII.”