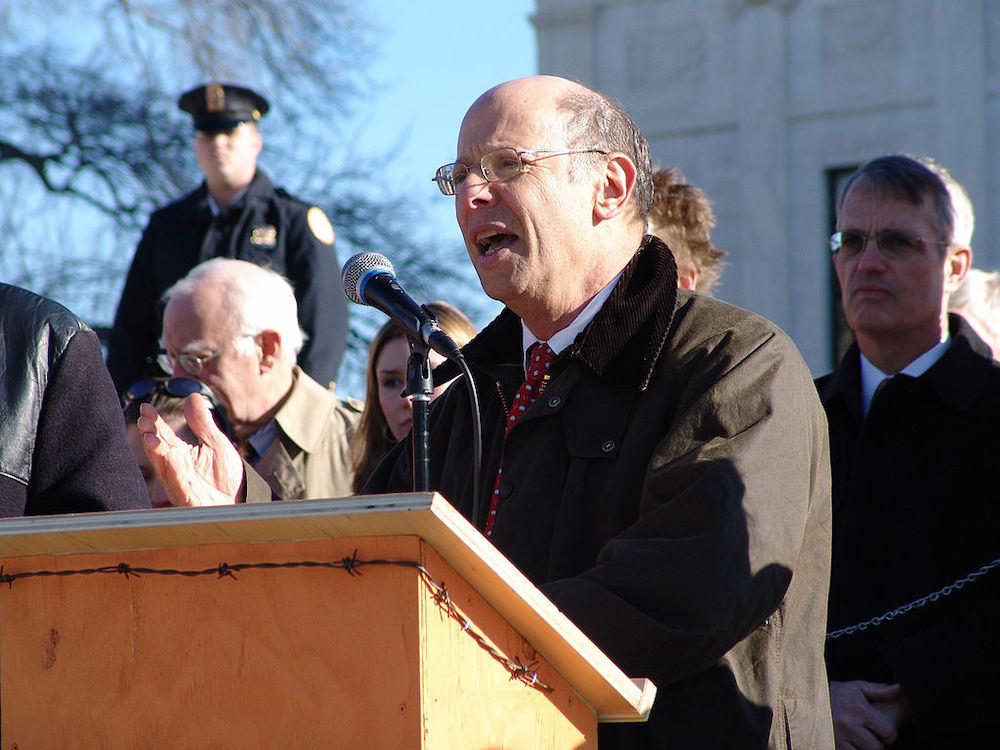 Attorney, author and Center for Constitutional Rights (CCR) President Michael Ratner is the recipient of the 2007 Puffin/Nation Prize for Creative Citizenship. One of the country’s foremost defenders of human rights and civil liberties, Ratner has led the fight to demand due process for Guantánamo detainees, adequate safeguards against intrusive government surveillance, and an end to torture and extraordinary rendition. Ratner will receive the annual prize on December 10 at The Nation Institute Annual Dinner Gala in New York City, the same week CCR returns to the Supreme Court representing Guantánamo detainees held indefinitely without charges.

Under Michael Ratner’s leadership, the Center for Constitutional Rights has repeatedly challenged the Bush administration on the constitutionality of indefinite detention and restrictions on domestic civil liberties. On December 5, Mr. Ratner and co-counsel will return to the Supreme Court with the combined cases of Al Odah v. U.S. and Boumediene v. Bush. These cases are the first to directly challenge the constitutionality of the Military Commissions Act of 2006 and its stripping of habeas corpus jurisdiction from federal courts.

“Michael Ratner has pushed the courts and the legislature to defend the rights of citizens and non-citizens alike by protecting the rule of law,” said Perry Rosenstein, President of the The Puffin Foundation, Ltd., the co-sponsor of the Creative Citizenship award. “The Puffin/Nation Prize is about more than a job well done. This award recognizes an individual whose lifelong commitment to social change has led to a true expansion of the rights and privileges we all enjoy. Mr. Ratner’s work certainly deserves this distinction.”

Each year, The Puffin Foundation Ltd. and The Nation Institute recognize an individual who has challenged the status quo through distinctive, courageous, imaginative and socially responsible work of significance. Candidates are found in a broad range of occupations and pursuits, and the award is intended to encourage the recipients to continue their work, and to inspire others to challenge the prevailing orthodoxies they face in their careers. Mr. Ratner is the 7th winner of the prestigious award. Previous recipients are Democracy Now! host Amy Goodman, educator and author Jonathan Kozol, journalist and author Barbara Ehrenreich, professor and anti-death penalty advocate David Protess, labor activist Dolores Huerta, and civil rights pioneer Robert Parris Moses.

“This prize comes at the right moment when we need all the courage and daring we can muster to challenge the lawlessness that characterizes the current administration. Standing up and fighting for what is right, although often very unpopular, is at the heart of the work of the remarkable women and men at the Center for Constitutional Rights,” said Ratner.

In addition to his work at the Center for Constitutional Rights, Michael Ratner has also been lecturer of international human rights litigation at the Yale Law School and the Columbia School of Law, president of the National Lawyers Guild, special Counsel to Haitian President Jean-Bertrand Aristide to assist in the prosecution of human rights crimes, and radio co-host for the civil rights program Law and Disorder.

In his book Guantánamo: What the World Should Know, Ratner provided an authoritative account of what Guantánamo means for the rule of law, for liberty, democracy, and the right to dissent.