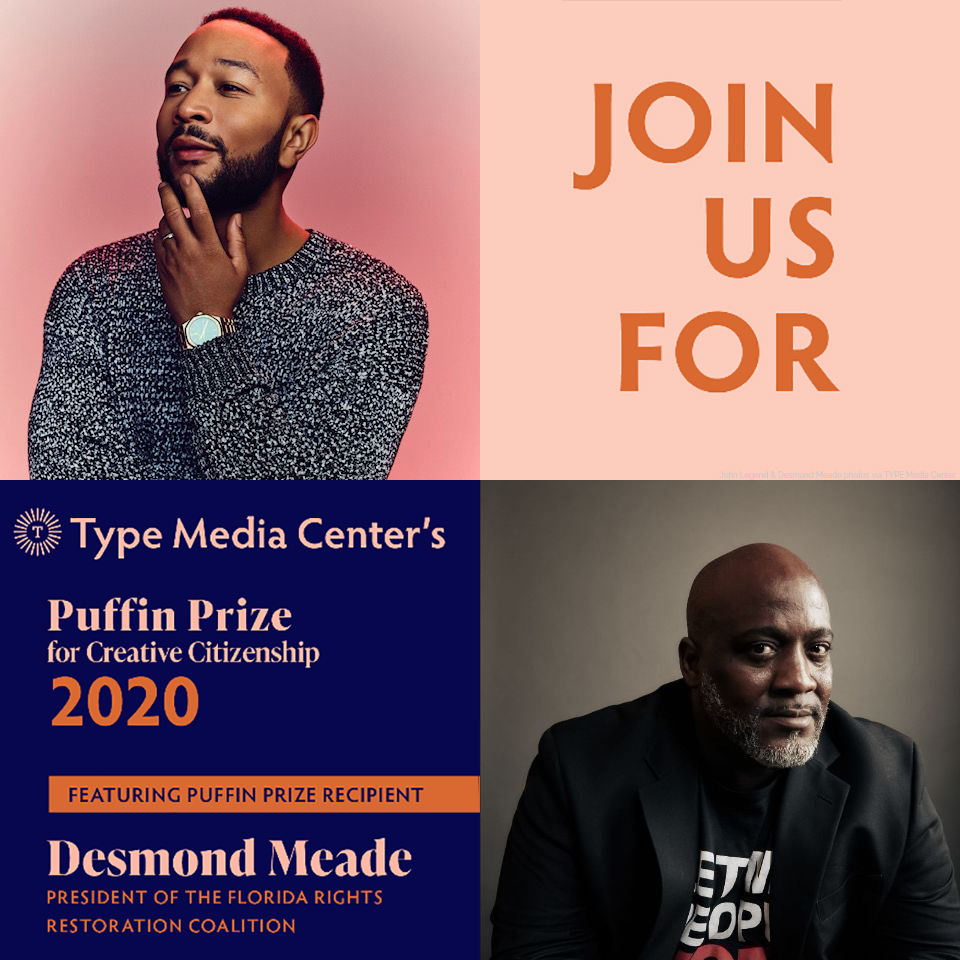 Join The Puffin Foundation, John Legend, and Type Media Center virtually on December 16th as we award the Puffin Prize for Creative Citizenship to Desmond Meade. John Legend will lead an intimate conversation for the event with Mr. Meade.

Desmond Meade is a formerly homeless returning citizen who overcame many obstacles to eventually become the President of the Florida Rights Restoration Coalition (FRRC) and Chair of Floridians for a Fair Democracy. He is a graduate of Florida International University College of Law, a Ford Global Fellow, and a published author of “Let My People Vote.”

Tickets are on sale now at Eventbrite.

Desmond Meade is a formerly homeless returning citizen who overcame many obstacles to eventually become the President of the Florida Rights Restoration Coalition (FRRC), Chair of Floridians for a Fair Democracy, a graduate of Florida International University College of Law, a Ford Global Fellow, and a published author of “Let My People Vote.”

Desmond led the FRRC to a historic victory in 2018 with the successful passage of Amendment 4, a grassroots citizen’s initiative which restored voting rights to over 1.4 million Floridians with past felony convictions. Amendment 4 represented the single largest expansion of voting rights in the United States in half a century and brought an end to 150 years of a Jim Crow-era law in Florida. Desmond presently leads efforts to empower and civically re-engage local communities across the state, and to reshape local, state, and national criminal justice policies.

A sought-after speaker, Desmond has testified at the United Nations and Congressional hearings He has appeared on numerous shows such as Al-Jazeera, Democracy NOW, MSNBC with Joy Ann Reid, and All In with Chris Hayes, and is a guest columnist for The Huffington Post.

Critically acclaimed, multi-award winning, platinum-selling singer-songwriter John Legend has garnered ten Grammy Awards, an Academy Award, two Emmy Awards, a Tony Award, and a Golden Globe, among others. He is also a coach on The Voice.

For well over a decade, John Legend’s philanthropy and advocacy has focused on building just, equitable, and thriving communities. In 2007, Legend started The Show Me Campaign, to give every child access to a quality education as well as address systemic issues in our criminal justice system that disproportionately impact the poor, minorities, and disadvantaged.

In 2014, Legend launched FREEAMERICA, a multi-year culture change campaign focused on ending mass incarceration. FREEAMERICA works to amplify the voices of those impacted by the criminal justice system and those working to change it.

In addition, Legend serves on the Board of Directors of Harlem Village Academies, the Advisory Board for The Quattrone Center for the Fair Administration of Justice at the University of Pennsylvania Law School, and Teach for All.