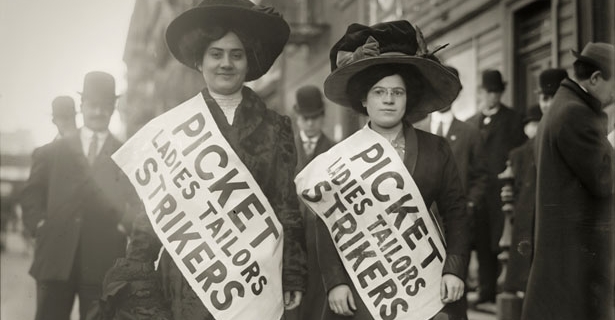 Activist New York: In These Times

Two strikers from the Ladies Tailors union stand on the picket line during the 1910 “Uprising of the 20,000” garment workers strike in New York City. (Bain News Service/Library of Congress)

‘Activist New York’ does not just archive and reflect the city’s activist history; it helps ensure that this history becomes part of the collective public memory.

Can curation be a form of activism? And how well do New Yorkers know, or value, their city’s activist past? These are two questions raised by “Activist New York,” the first exhibition at the newly inaugurated Puffin Foundation Gallery at the Museum of the City of New York. The exhibit is comprised of 14 separate booths, each devoted to a separate chapter of New York’s activist history; the booths are designed to be removed and replaced over time with new ones that document different chapters of this history. The causes the exhibit explores are eclectic. There’s Stonewall, of course, and the suffrage movement and abolitionism. There’s also space devoted to the recent fight for bike lanes—a cause which, I’m sure, is a grand and noble one, but which is also probably not on anyone’s list of Things That Are Just As Important As Slavery. There’s even a display on mid-20th-century conservative activism, a gesture so big-hearted that it might even be unnecessary, were it not that the pamphlets about welfare-leeching hippies are objectively hilarious.

The exhibit uses mixed media to tell its story. Artifacts from the time are arranged in glass cases, and screens project images of historic events. Scrolls on the wall explain the significance of the time period. An exhibit on the activist theater of the 1930s, for example, contains a bust of actor and civil rights activist Canada Lee. A table for gay rights contains scrolling images of protesters, including one young man holding a sign reading “GOD IS GAY.”

This exhibit about activism and social change is designed to be active, and to change; to move and grow, both with time and with the visitor’s own participation. “It would be a terrible irony if an exhibit on activism allowed viewers to be passive,” says Museum of the City of New York’s chief curator Sarah Henry.

I attended the gallery on a quiet Wednesday afternoon. It wasn’t crowded, but the people in attendance were fully absorbed, peering into touch screens and glass cases. To further engage museumgoers, the exhibit allows people to upload photos of their own activist movements, which are both projected on a wall and visible on the museum’s blog (activistnewyorktoday.mcny.org). This feedback loop allows the museum to reflect history in real time and democratically.

“Activist New York” is the brainchild of The Puffin Foundation, which, in addition to supporting individual artists and journalists at independent publications such as In These Times, has a long track record of working to ensure that America’s activist past is not forgotten.

“A lot of people, when they think of a museum, think of looking at history. Looking at paintings on the wall, looking at dinosaur bones is what likely comes to mind,” says Neal Rosenstein, the Puffin Foundation vice president. “But Puffin wanted this exhibit to be a testimony not only to the extraordinary struggles that have been made by activists and ordinary New Yorkers in the past, but also make a link to the activism that’s going on today.”

To that end, “Activist New York” features interactive booths at which visitors can participate in polls—for example, about their level of involvement or planned level of involvement in the issues at hand—and learn about contemporary organizations that are connected to historic causes. At the booth about slavery, you can learn about groups devoted to ending human trafficking. The exhibition makes room for the future to connect to the past.

This historical consciousness, this reflective questioning, is often missing in New York’s constant, attention-deprived focus on the present. And it’s already drawn criticism. Reporting on the May 3 opening of “Activist New York,” The New Yorker’s Lizzie Widdicombe quoted Occupy Wall Streeter Jessie Singer: “It’s activism. So looking back is the most dangerous thing. You know?” Singer wondered whether it might not be necessary to set up an encampment at the museum in protest.

However, an historical perspective helps one understand how social change is created. In the back of the gallery is a display that allows one to scroll through a timeline of various movements (“women,” for example, or “gay rights”) and to see when important events in that cause’s history occurred. This screen, more than anything, captured the essence of New York activism: The people who engaged in these causes weren’t just quietly conducting their separate activities. They were engaging with each other, and often fighting with each other, as episodes on the timeline make clear.

Gay rights activists’ protests against feminist Betty Friedan’s remark about a “lavender menace” (too much lesbian influence in the women’s movement) doesn’t just belong shamefully in a booth for feminism, or triumphantly in a booth for gay rights, but rightfully in our conception of both causes. This very idea of how social change works—bumpily, unevenly, and with conflict and connection being central to the process—should be useful to someone who’s taking part in a movement as diverse and wide-ranging as Occupy.

“There are very important lessons to be learned,” says Perry Rosenstein, Puffin Foundation president. “The first lesson is, why aren’t all of these issues in the museum being taught in schools?” Rosenstein says that the goal of the exhibit is not just to archive and reflect the city’s activist history, but to make sure that this history becomes part of collective public memory. He hopes to expand the exhibit into a book and into a curriculum that might be taught in schools. Curation, in this sense, is activism, a challenge to a normative view of history.

“The exhibit shows how people have made change for the better, how people were able to right wrongs, and how New York became a leader in making change,” says Gladys Miller-Rosenstein, Puffin Foundation executive director.

There will be more movements and activists as time goes on—and “Activist New York” may help create them. In order to produce change, one must first understand that change is possible. Seeing the shape of it, understanding the push and pull of how change has been created in the past, is one of the ways people can begin to envision their own resistance.

On the exhibit’s blog, there are plenty of pictures of Occupy and of the May Day movements. But there are also pictures of people tending community gardens or rallying against gun violence. And yes, there are pictures of bike lanes.

“It’s been our life to support every march against every negative thing that we’ve seen in society that we thought we needed to change,” says Gladys. And Perry adds, “This gallery is a milestone for activism.”

But no one, no matter how committed, can be part of every march in a city as big, as complex, and as passionate as New York.

The Museum of the City of New York, now, can be a part of every movement the people of New York deem worthy of recording.

Sady Doyle is an In These Times Staff Writer. She’s also an award-winning social media activist and the founder of the anti-sexist blog Tiger Beatdown (tigerbeatdown.com).

Link to In These Times and the original article