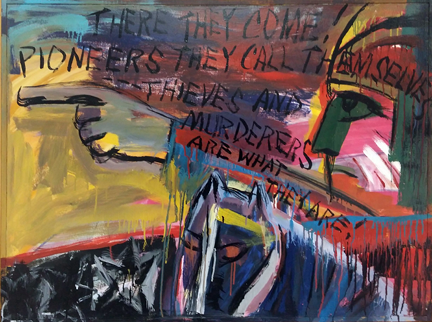 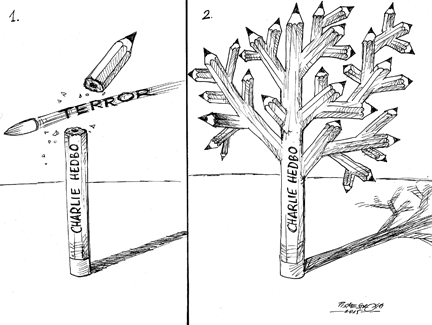 On view through February 26th, the Puffin Cultural Forum presents the works of late political artist, Hak Vogrin. Vogrin was an artist who reflected his personal pain and outrage regarding the issues of his day onto the canvas; destruction of the environment, wars, torture, social injustice, racism, consumerism are tackled with a cartoon-like directness that reflected his work as an underground comics artist in the 60’s and 70’s. His paintings are colorful, expressionistic, and unabashed in their message and assertive nature. Although Vogrin passed away in 2009, the urgency of the themes addressed in his artwork are seemingly more relevant now than ever.

Largely self-taught, Vogrin’s cartoons initially emerged in the underground comics movement of the 1960’s. His work appeared in the first issue of Yellow Dog, described as America’s “first underground comic weekly.” Throughout his life he created paintings and drawings the size of postage stamps, as well as those on large canvases. Although his sketches were often delicate, the paintings he produced towards the ends of his life were powerful, and produced in a bold graphic style with vivid colors. “When I paint, I think what I do comes out of chaos,” he told The New York Times in 2001.

In addition to Vogrin’s work, this exhibition will also include prints of contemporary political cartoons from Daryl Cagle’s Cagle Post. Cagle is America’s most widely syndicated editorial cartoonist, and his syndicate, Cagle Cartoons, distributes the cartoons of over sixty editorial cartoonists and fourteen columnists to newspapers around the world. Many of the images, perhaps too many, deal with the same issues that Vogrin dealt with, albeit from a humorous perspective. In light of the recent Charlie Hebdo attack, these editorial cartoons from various cartoonists are an even more powerful reminder of the importance of political artistic expression in our society. The exhibit is being updated to include cartoons responding to the terror attacks in Paris. Regular gallery hours are Tuesdays through Thursdays, 12 to 4 p.m. or by appointment. The Puffin Cultural Forum is located at 20 Puffin Way (off Teaneck Rd.) in Teaneck, New Jersey.

HAK VOGRIN: was born in Brooklyn in 1920, and began drawing comics as a child. In his early years, he worked on a commercial fishing boat in the Gulf of Mexico, and in a position as a margin clerk for Merrill Lynch. Around the time that Vogrin’s cartoons found an audience in the underground comics movement, he and his wife Jean opened a gallery in their apartment—“The One Flight Up.” Although Vogrin was not particularly interested in selling his work or seeing it exhibited, he participated in shows at the Noyes Museum of Art, the Long Beach Island Foundation for the Arts and Sciences, and in a New York show featuring the art of “Weird New Jersey.” His drawings and illustrations were included in publications such as Liberation Magazine andThe Realist, and in WBAI program guides and small press literary publications. Although his works were satirical and ironic, they always maintained their whimsical quality. In his last decade, Vogrin’s paintings specifically focused on sexuality and politics.