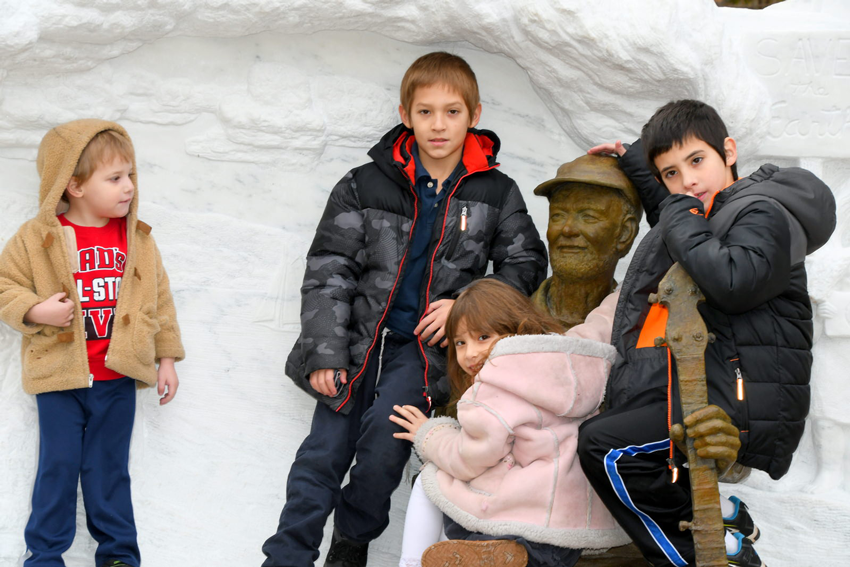 The public is invited to a weekend of festivities honoring Pete Seeger and the unveiling of the Puffin Foundation’s statue honoring his life and work by renowned sculptor Gary Sussman.

Photos and Video of the opening by NorthJersey.com here: https://www.northjersey.com/videos/news/bergen/teaneck/2018/05/05/pete-seeger-gets-his-own-statue-teaneck-puffin-center/583940002/

7:00pm
Film: Pete Seeger: The Power of Song
The Power of Song, was directed by Jim Brown and tells the story of Seeger’s life and music. The film won an Emmy award and was Executive Produced by Seeger’s wife Toshi Seeger. An audio story recording station will be available from 5-7pm if you would like to contribute your story of how Pete touched your life.
$5 Suggested Donation, Reservations Recommended

Film: “If I Had a Hammer” by Christopher Lukas
The creative process of sculptor Gary Sussman in creating the first sculpture of Pete Seeger is documented in this insightful documentary by filmmaker Christopher Lukas. Early sketches and models used by Gary Sussman will be on view along with the film. Film and display will be on view from May 4th to 31st in the Puffin Gallery foyer.

12:00pm
Community: Pete Seeger Statue Opening
Join in the unveiling and opening of the finalized statue of Pete Seeger in the Puffin Sculpture Garden. Remarks will be given by the Puffin Foundation, sculptor Gary Sussman who will be in attendance to present the sculpture. Opening also features music from folk artists Jacob and David Bernz from Beacon, NY.
Free, Reservations Recommended

1:00pm
Workshop: Sculptor Gary Sussman
Artist and sculptor Gary Sussman will lead an educational presentation and workshop about the three-year process of creating the Pete Seeger statute. Participants will learn about the artistic process and have an opportunity to get hands on experience with real marble.
Families and children are welcome!
Free, Reservations Recommended

2:00-4:00 pm
Community: Outdoor Open Stage – Session 1
The Puffin Outdoor Stage will be open and available to performers from all genres. If you are interested in signing up for stage time, please submit your performance proposal to , or call 201-836-3499. We’relooking for performances that relate with Pete Seeger and his legacy of activism! Submissions of spoken word, poetry, dance, music, theater, etc., are all welcome!
Free, Reservations Recommended

8:00 pm
Folk: Tom Chapin
The Puffin Cultural Forum is proud to present Grammy winning singer/songwriter, Hudson Valley Troubadour, and activist Tom Chapin. Described by NYT as “one of the great personalities in contemporary folk music.” His prolific career brims with achievements from performing, writing songs on celebrated stages to being a vocal advocate for social causes. Tom last performed with Pete Seeger in 2013 at the Towne Crier Cafe to celebrate the 65th anniversary of the creation of the Weavers.
$10 Suggested Donation, Reservations Recommended

Sunday, May 6 2018
2:00-4:00 pm
Community: Outdoor Open Stage – Session 2
The Puffin Outdoor Stage will be open and available to performers from all genres. If you are interested in signing up for stage time, please submit your performance proposal to , or call 201-836-3499. We’relooking for performances that relate with Pete Seeger and his legacy of activism! Submissions of spoken word, poetry, dance, music, theater, etc., are all welcome!
Free, Reservations Recommended

4:00 pm
Folk: Kristen Graves Sing-along
Kristen Graves is a singer/songwriter, described as “the new generation of folk” by Kitama Cahill-Jackson in the NYT. Bring your singing chops to the concert as Kristen presents her rendition of some of Seeger’s beloved songs and leads us in a sing-along. Known for her activism, humanitarian efforts, and her music, Kristen has graced the stage with Pete Seeger, Harry Belafonte, Peter Yarrow, Holly Near, Guy Davis, and many other folk greats of our time.
$10 Suggested Donation, Reservations Recommended

Members of the Puffin Camera Club taking pictures with Pete

Good afternoon. It’s truly a pleasure and an honor to be welcoming all of you to the official unveiling of this extraordinary sculpture honoring the life and work of the legendary singer-activist Pete Seeger.

Pete passed away just over four years ago, shortly after the death of his beloved wife Toshi. It was shortly after that time that Perry Rosenstein, the President of the Puffin Foundation decided that we should commission a work commemorating his life and achievements. Today, we celebrate the three-year journey to complete the work you see before you today. How fortunate we were to find former Teaneck resident Gary Sussman, whose talent and dedication brought this magnificent work to fruition.

One thing was vitally important to us here at Puffin as this project proceeded: That Seeger should be honored not only as one of America’s greatest folk artists, but as an activist who used his talent to fight for so many issues throughout his life. Issues that remain so important today for we still find ourselves in many of the same and many new threats to our country. We are indeed still Waist Deep in the Big Muddy. If you look at the figures behind Pete, they carry a message for future generations to see, that the fight for a better world is an ongoing work that requires us all: Those figures are holding the protest signs that help represent the force and principles behind so much of what he stood for: “The Hammer of Justice, the Bells of Freedom and …love between your brothers and your sisters all over this land.”

Seeger was well known for his environmental activism, the creation of the Clearwater and his love of the Hudson River, all also highlighted on this work. But it would be wrong to only commemorate these extraordinary achievements. His work for environment, and his beautiful Hudson Valley are represented here, but so also are the fight for labor rights, peace, civil rights, and the fight against fascism.

I’d like to digress for just a minute or two to tell a personal story. Back in 1979, I attended a large rally of 15,000, protesting the opening of the Shoreham nuclear power plant on Long Island. Pete was the headliner, but before his set, it began to rain…and rain really hard. My friend Jed and I figured the best place to be on that wet beach would be under the elevated stage, so we snuck across the tape barrier and sought refuge underneath where we stayed dry. We were hungry and broke out a snack of raisin biscuits…kinda like thin fig newtons. As we huddled under the stage we were also very nervous, since we didn’t belong there, always looking over our shoulders to see if security would come to send us back out into the downpour. Well, pretty soon a hunched over figure came under the stage…and made his way toward us. It was Pete and we were terrified. Terrified that we were in the wrong place…and terrified that it was Seeger…Pete Seeger himself! He came over and sat down next to us and said hello. We were pretty awestruck, but Pete certainly wasn’t. He didn’t question who we were, or why we were there, and we just all sat there, under the stage in silence. Then I summoned up the courage to offer him a raisin biscuit. He declined…but then, I swear, I immediately said “It’s all natural”. He looked at me, paused for a moment and said “Well sure then.” And there we were, two bedraggled teenagers hanging out under a stage, eating raisin biscuits with the most famous folksinger in the world. It was a dream come true.

Gary’s wonderful work not only captures the life and causes of this great American, it makes Pete accessible to everyone who comes to visit. On behalf of Perry & Gladys Rosenstein & the Puffin Foundation, we hope you’ll all take the time to sit down and spend some time with Pete.

It’s now my great privilege to introduce the sculptor, Gary Sussman. It’s been a truly wonderful experience to work with him over the past three years to bring this extraordinary work to the public.